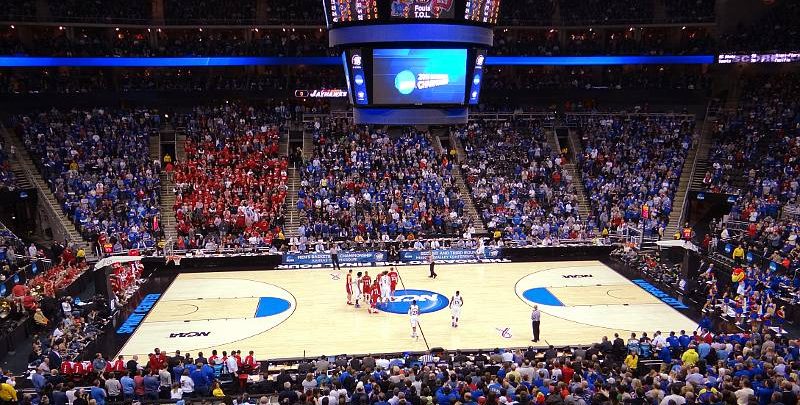 The NCAA Men’s Basketball Tournament is heading back to Kansas City this year March 23rd-25th 2017 for the Midwest Regional. This last time KC hosted the tournament was in 2013 and the last time it hosted regional games (sweet 16/elite eight) was in 1995.

Kansas City doesn’t get to host the NCAA Tournament every year but it has a rich tournament history. Did you know KC has crowned 10 NCAA Tournament Champions and punched 13 Final Four tickets?

In honor of March Madness coming back to KC here’s our top 5 tournament moments from the city of fountains.

If you are picking an upset in the NCAA tournament you might target the 5 vs 12 games and the 4 vs 13 games. These seedings are the breeding ground for upsets, rarely do they happen back to back. But that’s what happened in 2013 at the Sprint Center. Both Mississippi and La Salle shocked the crowd and their opponents Wisconsin and Kansas State respectively. Two upsets in the span of 4 hours is why they call it March Madness.

Number 4: 1956 Championship Game – Back to Back Champs

Winning one NCAA tournament is hard enough but going back to back is something only a few teams have done. In 1956 the San Francisco Dons did just that, led by the great Bill Russell. Both titles by the Dons were won in Kansas City.

Number 3: 1964 Championship Game – The Beginning of an Era

UCLA and John Wooden have more NCAA titles than anyone else, but that must start somewhere and that somewhere was Kansas City. Nobody knew that John Wooden would be the best there ever was back in 1964. Never-the-less this win kick off college basketball’s most impression streak.

Is there any better thing than a hometown team winning the championship no one expected them to win? Not if you ask Kansas fans. 1988 was a magical run fueled by a one man wrecking crew by the name of Danny Manning. Manning used 31 points and 18 rebounds to beat number one Oklahoma in one of the NCAA’s biggest upsets.

If you know college basketball, then you know Kansas and North Carolina are about as good as it gets. North Carolina came into the game with an unbeaten record and Kansas came in with the greatest player of his day Wilt Chamberlain. Add in a three-overtime game and you have one of the greatest games ever played – sadly won by UNC and not KU.

What will this year’s set of games hold? If we take the games above as a sample the likely answer is something historic. Don’t miss your chance to watch it live in person with tickets from TicketsForLess.com.