The Chiefs kicked off the 2010 NFL season in Atlanta against the Falcons. With former Chief and future Hall of Famer Tony Gonzalez on the other sideline, it was a strange game to watch from the beginning. The Chiefs dropped game one of the preseason, to the Falcons, 20-10.

I think the best way to describe the game was “uneventful.” Although the game was incredibly boring to watch (as most preseason games are), there were some bright spots in the Chiefs offense. Matt Cassel and others on the main starting crew only saw limited time, and during the time they were in, not much happened. The ball was rarely moved down field, and there was virtually no exciting plays offensviely what so ever. After the first quarter came to an end and some key starters were removed, Dexter McCluster gave the Chiefs a glimpse of what lies ahead.

Some people tend to believe that drafting McCluster that high in the draft was a faulty move. A mid grade college running back in the 2nd round who is just above 5’7 and 170 pounds. It was easy to see that Scott Pioli drafted him as high as he did to bring one asset to the table: team speed.

If this is truly the case, then well, you have to applaud the man. Mission accomplished….

Dexter McCluster showed us Friday night that not only is he only of the fastest players in the NFL, but he’s also one of the bravest. You could easily see that he was playing like every play was his last taking hit after hit, and that one more yard meant so much more to “HIM” than most running backs in the league. He knows his role and doesn’t have a big head like Dwayne Bowe or anything. To make this short and sweet, the guy simply makes our team better. Without a doubt.

Thomas Jones, and Jamaal Charles are the big guns behind the quarterback, but with McCluster filling up the slot, that gives new offensive coordinator Charlie Weis more options he can work with. Last year I thought that not having a strong core of wide receivers was a bummer and made it easier for defenses to read us. Now with McCluster in there, the lack of wide out talent is sort of put to the back burner and is not as vital as before.

The Chiefs head to Tampa Bay on Saturday with hopes of bringing in a win, then it’s back home to the Midwest to open  up the new present under the tree that is “Arrowhead.” They will host  Eagles August 27th.

For tickets to that game as well as any other NFL game this year, contact your friends at Tickets For Less where we can get you the seats you deserve… Just call 913.685.322 or visit our website at www.ticketsforless.com!!! 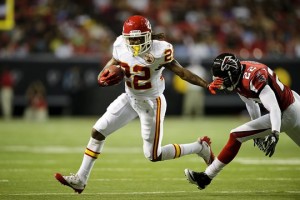