On Monday September 13th, The Kansas City Chiefs will host the San Diego Chargers on the opening week of the season and the first Monday Night Football broadcast of the year. Taking place in Kansas City and on ESPN used to be a thing of the past, but with the additions of Charlie Weis, Romeo Crennel, Thomas Jones, and some veteran offensive lineman, ESPN must  see this Monday  Night treat as a fairly profitable one.

The Chiefs might have made some decently exciting off season moves, but the Chargers all but lost everything they represented when LT was released. It is officially Philip Rivers team now, and although San Diego has made multiple playoff runs lately, I think it will be a harder climb up the mountain this year. Kc, Oakland, and Denver are not the best of teams, but I think all have improved a little this off season. Combined with the addition of a few solid draft picks, and the AFC West could be on it’s way to becoming a competitive conference again. It will be interesting to see what the Chiefs come out and do during the first couple plays of the season with Charlie Weis calling the shots. I believe we have the talent to be a playoff team, we just need a few coaches capable of calling the right plays when the game is on the line and playing the right players in the right situations. I think Weis and Crennel are the right men for the job. Someone the players can trust, who have built a reputation of success.

I think stock in the Chiefs should be going up in the near future and hopefully we will get back to our old ways. Just as long as we avoid the Colts.

If you want the best seats to Monday Night Football, contact Tickets For Less at 913.685.3322 or hit up the website at www.ticketsforless.com. Don’t forget about  buying a seat to the Royals game before hand! It should be one stellar Monday night for Kansas City sports… 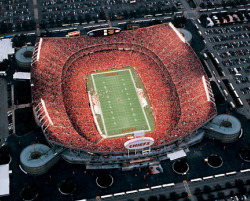