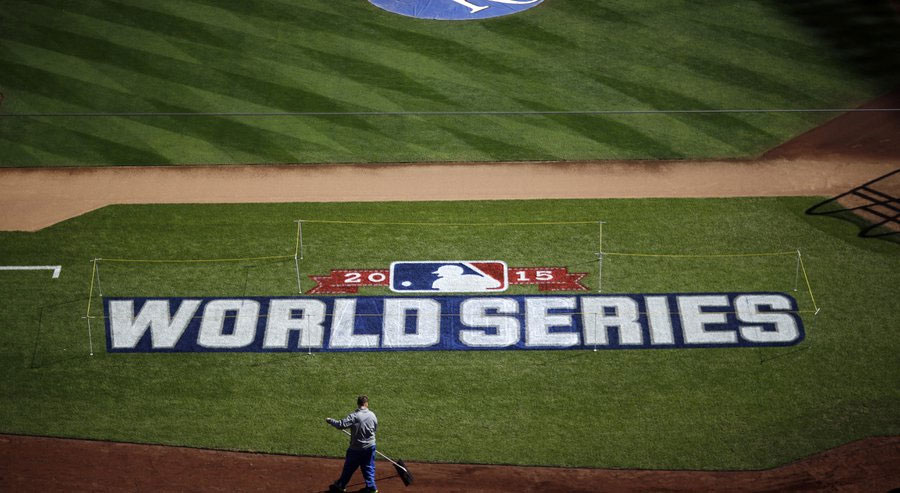 Game 1 has finally arrived and the Kansas City Royals are focused and ready to take care of unfinished business from 12 months ago when they came up short in game 7 of the 2014 World Series against the San Francisco Giants.

The pitching matchup will make for one of many great ones, with Edinson Volquez taking the mound against New York’s Matt Harvey.

The Mets come in with the more highly touted pitching rotation, but as a whole, the Royals would appear to be the more talented team when you consider starting pitching, bullpen, offense, and defense.

Volquez has maybe been the most consistent pitching this postseason, regardless of the win/loss record. In his last outing, which was a loss, Volquez pitched magnificently but dealt with a dreadfully tight strike zone, and one which the Royals were vocal about during the game.

In game 1, Volquez will attempt to keep that consistent pitching going against a much less potent offense in New York, at least relative to that of the Toronto Blue Jays.

The Mets put up runs against the Chicago Cubs in a 4-game sweep, but against the Royals inside Kauffman Stadium, there shouldn’t much of a fear that New York will run away from Kansas City with high run totals.

Even if KC were to find themselves down by a few runs early on, the Royals have proven time and time again that no lead is safe and the team will continue to battle and chip away until the very end.

The Mets pitchers are known for their blazing fastballs–all four capable of hitting 100–and will throw fastballs more than 60% of the time, which may play into the hands of KC, which is a tremendous hitting team and rarely strikes out.

I may benefit the Royals to play some small ball, much like they did last postseason, in order to keep runners on base and pressure the Mets starters.

As in any series, winning game 1 is the crucial. Setting the tone with a win in front of the home fans can make a major statement to the opponent and quickly get them in a 1-0 hole. A win for the Mets would be monumental, forcing KC to potentially win a minimum of 2 games on the road at Citi Field.

No team wants to face a 3-game set on the road in a must-win scenario, which is why the Royals need to take full advantage of their opening two games at Kauffman Stadium.

Defensively, Kansas City has a major advantage at almost every position. With gold glovers all over the field and ALCS MVP Alcides Escobar leading the way, it almost feels like Kansas City has double the number of allowed defensive players.

New York was able to get to the pitching staff of Chicago in the NLCS, but expect the Royals to game-plan much like they did against Toronto and make the Mets get on base the hard way, limiting the long ball and keeping doubles to a minimum.

The weather conditions will be a test for both teams, and may lead to more small ball and manufacturing of runs by both sides. One thing is for sure, Kauffman Stadium is going to be as loud as it has been all postseason and will provide the Royals will a distinct home-field advantage.

Tickets are still available for game 1 of the 2015 World Series. Already going? Head to Tickets For Less to purchase seats to game 2, Wednesday night, to cheer on your Kansas City Royals as they look to notch another postseason victory. With a variety of seating options located throughout the stadium, and value pricing with zero hidden service fees, what you see is what you get, unlike many of our competitors. The Royals are 4 wins away from a World Series championship, so make sure you never miss out on the action this postseason. Go Royals!