George Steinbrenner, arguably the greatest professional sports owner of all time, passed away this week.

As a Royals fan, I always viewed George Steinbrenner as a man of greed. A man who held control of one gigantic monopoly. A man who didn’t have to put in the effort because “all the money in the world” was at his finger tips. A man who could buy any player he wanted. A man who didn’t care if the Royals couldn’t compete.

While some of these opinions may be correct, some false, I now realize how important Steinbrenner was to the game. It’s easy as a fan of the small market Royals to be bitter at every move George made. He had a pile of money. He was happy. The Yankees always win. The Royals always lose.

Like I have said in the past. If you are going to be successful as a owner in Major League Baseball and you expect you’re team to win, TAKE RISKS.

Steinbrenner was the biggest risk taker of all and as a fan of a team (Royals) where the owner takes few risks, I have to respect the man to the fullest. He is the guy in the casino who is winning boat loads of money on the Roulette table. The one who covers the entire board with chips. The one who gives himself a chance to survive. The one who isn’t afraid. and………………………in return………….for such qualities as these, he reaps the benefits, and wins. MOST OF THE TIME.

I understand that flukes may happen, and you may lose when you are indeed the favorite, but in Major League Baseball, George Steinbrenner took the risks necessary to make his team a contender, year after year. Sure, they didn’t win the series every year, but they were a winning team EVERY year. That attracts players. Along with a paycheck of course.

He was a baseball fan’s dream, and baseball will miss him for sure. When  a scout sees a great baseball player, he says “wow, that guy plays the game the way it’s supposed to be played,” and in ownership terms George Steinbrenner played the game the way it was supposed to be played. He did everything he could to protect his business from failure, and the only shield for protection in this business, is MONEY.

Job well done, George. We could all learn from your fearless, risk taking behaivor.

The Royals take on the New York Yankees in a four game series at the K starting August 12th- August 15th. Be sure to purchase your tickets today as they are going fast!!! 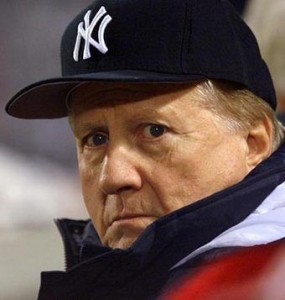