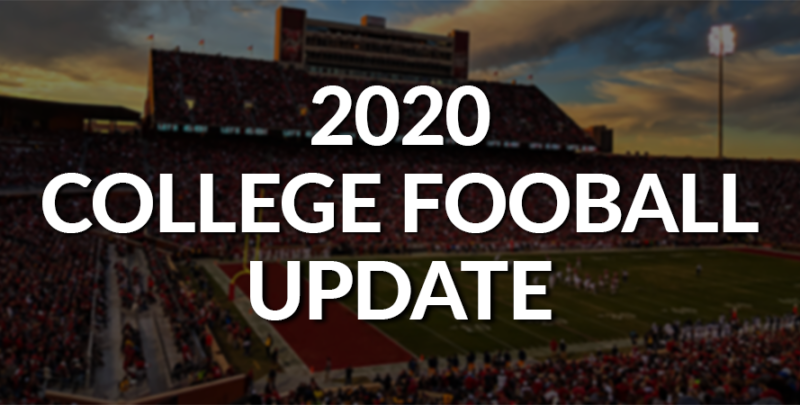 The landscape of the 2020 college football season has become clearer this week, with the Big 12, ACC and SEC all announcing their intentions to move forward with a season this fall. On Tuesday, the Big Ten and Pac-12 announced they are postponing their seasons with the hopes to play in spring of 2021.

Today, the Big 12 announced conference play would begin on Sep. 26th and conclude on Dec. 5th. The Big 12 Championship game in Dallas is scheduled to take place on either Dec. 12 or Dec. 19, providing an extra bye week if it becomes necessary. | Big 12 Conference Schedule

The ACC announced on Tuesday their plans to move forward with a football season in 2020. They initially announced their intentions to play back on July 29, with a “10+1” schedule model. This model includes the adoption of Notre Dame as a conference member for the 2020 season.

The Big Ten became the first Power 5 conference to announce their plans to postpone the 2020 season on Tuesday, August 11 amid concerns over COVID-19. The decision came after a vote by university presidents and chancellors at member institutions. The Big Ten has plans to attempt to play the season in the spring of 2021.

The Big 12 Conference became the linchpin for the 2020 college football season after it became clear that the ACC and SEC planned to move forward with a season and the Big Ten and Pac-12 had postponed their seasons. In the end, the Big 12 cited the desire of student-athletes to continue with fall sports as one of their deciding factors to push on with football and other sports.

The Pac-12 became the second conference to postpone fall sports, including football, on Tuesday, August 11. The Pac-12 CEO Group voted unanimously to postpone all sport competitions through the end of the 2020 calendar year. The conference hopes to play a football season in the spring of 2021.

The SEC were the clear leaders in keeping a 2020 football season a reality. They have been deliberate in their stance, citing that student-athletes are in a better environment on campus to stay safe from COVID-19. The SEC announced plans to move forward with fall sports, including football, on August 1, issuing a revised conference football schedule a week later.