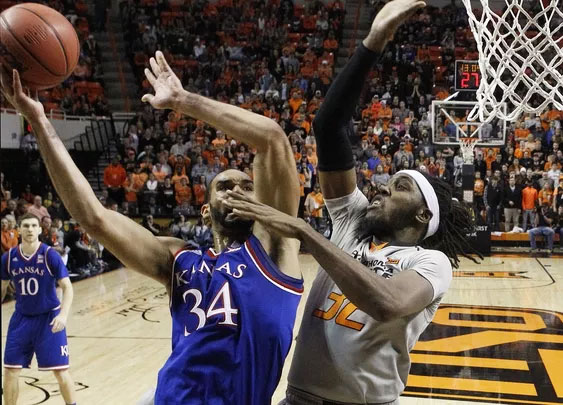 This loss to Oklahoma State probably still won’t keep KU from winning their 12th consecutive Big 12 Title, but as we know, Kansas is good for an ugly in-conference loss that you can’t really explain every year. I mean, they were just flat out bad on the road in Stillwater Tuesday night, even worse than they were in Morgantown last week against a very good West Virginia team.

Will this be the year that someone dethrones KU for an outright Big 12 Title? That remains to be seen, but Oklahoma, West Virginia, and Iowa State are certainly capable and up for the challenge. Oklahoma has the best player in the league, and Iowa State looks to be back on track with a big win the other night over OU. There are four teams that will compete in this league, and each one has a distinct identity, besides Kansas.

Not to say the Jayhawks aren’t capable of scoring with anyone in the league, or country for that matter. It just seems like we don’t know who is going to step up in big games for these guys.  Frank Mason is in a complete funk right now not only shooting, but turning the ball over as well. Perry Ellis will probably end up being the go-to guy down the stretch when KU needs a bucket, but there is something missing with him and it’s hard to put a finger on. He didn’t shoot well Tuesday night but he wasn’t alone.

Wayne Selden probably has more natural ability than anyone on the floor, but even in his junior season in Lawrence, he’s not the complete player yet.

Kansas has a very deep bench, and has multiple guys that can score, but they seem like they lack an identity that teams such as Oklahoma, Iowa State, and West Virginia have.  Oklahoma you could argue has two of the three best players in the league. OU runs through Buddy Hield and Isaiah Cousins.  Iowa State has a dominant post presence, and a star in Georges Niang. West Virginia’s defensive pressure is unmatched by anyone. So what’s the Jayhawks identity? It’s something they are going to have to find if they want to make it 12 straight conference championships.

As for the rest of the Big 12, it’s going to be an exciting 6-7 weeks filled with lots of drama and upsets. This is the best regular-season league in the country, and has had the most entertaining games on national TV so far. One thing the elite-level teams in this league have in common is their ability to have multiple players score. All four of the top teams in this league have at least four players averaging double figures. This is what separates them from the rest of the country. Everyone else besides North Carolina seems to have trouble scoring at times.

Don’t forget about Baylor, they’re 14-3 with a road win at Iowa State.  Also, Texas looks like they are good enough to pick off a big boy. As for K-State, you would feel a lot better about their chances at a NCAA Tournament bid had they been able to split their home games against WVU and ISU, but both were double digit losses. I feel even last years’ incredibly inconsistent and drama-filled team would have split those games. It won’t get any easier either, the schedule is brutal the next three weeks.