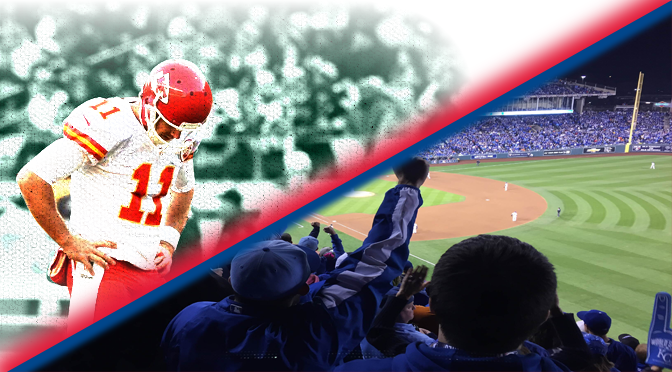 We all thought this was it, the time had finally come when both the Royals and Chiefs make the post-season the same year. Doesn’t look like it now, I’ll elaborate on that in a minute.

First, the Royals, they accomplished every goal they set for themselves this season and that bodes well going into the playoffs. They won the A.L. Central with the best record in the American League, thus securing home field advantage. They also know that taking the Wild Card winner lightly could end their post-season as quickly as they ended the LA Angels 2014 post-season in the ALDS.

The key for the Royals is simple, starting pitching. They have the bullpen, offense and defense to beat anyone, but the starters have to get through at least 5 innings before turning it over the bullpen. And after a shaky month of September, they got things rolling in the right direction with 5 straight wins to close out the season. Since 2002, only three playoff teams with losing Septembers have made the World Series.  The Royals finished September 11-17, but 4-0 in October, not sure what that means.

It looks like the pitching rotation will go Yordano Ventura, Johnny Cueto and Edinson Volquez. Ventura has been red hot. Volquez. with over 200 innings pitched, is the steadiest guy in the rotation while Cueto is still a mystery. He tends to get into and out of jams like Houdini. Cueto is not the guy the Royals traded for, they were looking for a Madison Bumgarner type, but Cueto’s not that guy. Sundays performance was fine, he won, but his speeds were down in the upper 80’s to low 90’s, and that’s a little scary moving into the post-season where great teams feast on that stuff.  Yost won’t hesitate to yank any of his starters with that stacked bullpen waiting out there. Ned Yost should leave Herrera in his normal 7th inning spot,  because  that gives you the opportunity to let Herrera pitch two innings instead of just one. Davis will be fine as the closer. Depending on the situation, Hochevar or Duffy can handle the 8th.  Also remember, we’re nit picking the Royals, but every team in the A.L. and N.L. Playoffs has flaws, there is no perfect team out there. All the fan bases have some angst and anxiety about their teams. Welcome to the post-season.

Now to the Chiefs, first, the good news, at 1-3 they are not out of the post-season. Since the new playoff system was adopted in 1990, 25 teams that started out 1-3 have made the playoffs and the 2002 N.E. Patriots started 1-3 and ended up winning the Super Bowl. Of course, they had Tom Brady, the Chiefs don’t gave a quarterback like Brady, in fact, Alex Smith appears to be getting a little gun shy. When you watch him play, Smith has a tendency to look at the pass rush instead of downfield at his receivers, that’s why you see him miss so many wide open guys and just dumps it down to his running backs. Also remember, they’ve lost to three of the best quarterbacks in the league and had Peyton Manning and the Bronco’s beat but couldn’t finish the job. That one could really hurt come playoff time. Looking ahead, they have some very winnable games starting  with the Chicago bears at Arrowhead next Sunday. In fact, the next four games will determine their season. They should beat the Bears, the Vikings on the road, the Steelers, without Ben Roethlisberger and the Lions in London. That run would get them back to 5-3 at the halfway point of the season and set them up for the second half. So all is not lost.

The biggest problem for this team is painfully obvious for Alex Smith; the offensive lines pass blocking skills, they don’t have any. They’re terrible. Smith has already been sacked 19 times this season. There is no way he survives getting hit that often, but before you start saying Chase Daniel, I’ll tell you this, he’d probably win some games with his feet, but after a while, defensive coordinators would scheme against him and his height would quickly become a problem. Winning a ” few games” is not the objective, it’s winning the Super Bowl, you don’t do that until you have a solid #1 quarterback. You can look at a lot of reasons why the Chiefs haven’t been back to the Super Bowl since the late ’60’s, but one reason is painfully obvious, they haven’t had a Hall of Famer calling signals since Len Dawson. The last time they were even close to a Super Bowl was January 16, 1994, when they lost to Buffalo in the AFC Championship Game with Hall of Famer Joe Montana at quarterback. This franchise has never developed a Super Bowl quarterback, never. Dawson was drafted by the Steelers, Montana of course, was a 49er. Until the Chiefs draft and develop their own guy, it’s going to be very difficult to get back there.