On Sunday, January 9th, the Kansas City Chiefs will host the Baltimore Ravens in their first home playoff game since 2003. Here is a generic look at the tale of the tape on both sides of the ball. I think we are in for an interesting matchup. After examining the statistics I think we can pull out these assumptions. A.) Both the Ravens and Chiefs have a weak passing attack. Not saying they don’t have the tools for a decent one, but it obviously isn’t the focal point of their offensive success. B.) Both teams prefer to run the ball than pass (most of the time). The use of Jamaal Charles and Ray Rice is important in this playoff game. I expect both teams to use each player way more than usual. C. ) The Chiefs, holding the best rushing game in the NFL, find themselves now facing one of the best run stopping defenses in the league, the Ravens. It will be interesting to see which side comes out with the edge. D.) Suprising for the Ravens but not the Chiefs, both teams give up a fair amount of yards in the air, which gives both Cassel and Flacco a little more hope to get the ball to the wideouts, slot men, and tight ends.

I expect this to be a very tight game, but I do think Baltimore is the better team. But not by much. If this game were in Baltimore, it would be an easy pick for the Ravens here, but since it’s is in Arrowhead, the crowd noise should definitely play a factor to even out the matchup.

Tickets For Less is THE BEST PLACE for seats to the game this weekend at Arrowhead. Check out www.ticketsforless.com or give us a call at 913-685-3322 to get the seats you deserve. 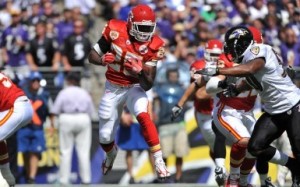