These are career stats based on a 162 game avg.

Ok, so here is the 162 game career predictions for the two main players in this trade. I am officially fed up as a Royals fan. Dayton Moore, I’m sorry but you just don’t cut it. You are a poor negotiator and in this case, you have made our team worse. The stats don’t lie.

I have said for a while that Dejesus was the backbone of this team. Out of such a negative group of current players, the Royals did have SOME remaining bright spots. Dejesus was one of them. MARK MY WORDS, this trade will haunt us in a similar way to the Johnny Damon trade. Dejesus is just like Damon as far as playing skill. An above average hitter who gets on base and has the consistent ability to spark a rally. Oddly enough, he was traded to Oakland like Damon, and I guarantee Billy Beane will use his unexplainable magic to trade him to Boston or New York for great, young talent. He will go on to win a world series…

-A player who has lived through the ups and downs of a struggling franchise.

-A player who has been consistently productive

-A player that younger talent can build and rally around

-A player than has more than 3 tools

I no longer understand the logic of the Royals front office. What exactly are they trying to do here? They are on a 15 year rebuilding process!!! It’s makes me ill, and I can’t take it anymore. The ONE player you should have KEPT, you TRADE??? Hahahaha.

Vin Mazarro? Who is this guy? If he was worth a darn, we would have heard about him by now….AND from now on, the only players the Royals should be trading for are players we have heard of. Does Dayton Moore believe in Mazarro just as he did in HILLMAN?? I surely hope not…

In my opinion, and if you study trends of world series teams, there always seems to be that one player who the team never gave up on. The one player who stuck it out through the pain and agony of losing, all in the end to win the pennant. The guy the team rally arounds. The guy who is the face of the team. The LEADER.

David Dejesus could have been that guy. The important piece of the puzzle that Dayton Moore failed to keep. You can’t just win a world series with a boat load of rookies. That’s what teams like the Padres and Diamondbacks have….and they are just like us, paralyzed by decision. It’s tragic really… To witness such criminal acts. Look at a team like the Rays. They have their roster filled with high end rookies with a lot of talent like the Royals have coming up. BUT, they have Carl Crawford. The Royals were still a couple years from going to the world series….They needed Moustakas and Hosmer to turn into Longoria and Upton, and Dejesus to be the Crawford. Then they would really put themselves in the proper position to win.

This is not a sprint in Major League Baseball. You need stamina, and that is what Dejesus provided us. Stamina by experience. Does Dayton Moore plan on keeping one single guy in a Royals uniform for more than five years? Can we have a true Royals player? or do we constantly have to search the ebay of baseball to piece together a make shift losing team? I understand trades are necessary in the MLB, but this one makes no sense. None of the Royals trades do. EVER.

Take a deep breath, Dayton Moore. Look at what you have in front of you and trust it. It’s ok to have a 30 year old on your team…

My best wishes to the Oakland Athletics. Big props to you for taking advantage of a financially sound opportunity. You got more, for less.

Speaking of getting more for less….. For the best seats to any Royals or Chiefs game, contact Tickets For Less. Your best source for tickets with the widest selection local and nationwide. Simply call 913-685-3322 or visit the website at www.ticketsforless.com today! 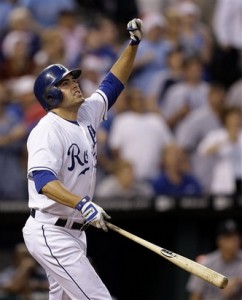