great days with warmer weather, good food, good drinks and some good company. If you just can’t get enough of NASCAR this May, you can catch the October Race, for the NASCAR Xfinity Series: Kansas Lottery 300 and Monster Energy NASCAR Cup Series: Hollywood Casino 400. 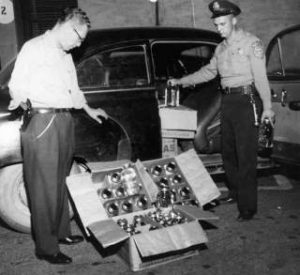 Image courtesy of Cruising The Past

Whether you attending the May race, October race, or both, you can be sure to have an unforgettable time. NASCAR is a great weekend adventure, but how exactly did it get here? When did the iconic sound of “vrooms” make people’s heart pound with excitement? Why did the first fans begin to fill the grandstands? When did racers began to disregard “slow and steady wins the race”? Knowing the history of NASCAR makes watching the race a lot more fun. Because of some bootleggin’ boys the world of NASCAR began. Now you can watc star drivers like Kyle Busch, Chase Elliot, Danica Patrick or Martin Truex Jr. compete in races that stemmed from statewide police chases.

The history of NASCAR dates back to prohibition time when alcohol was banned and it was hard to get your hands on some booze. That is, for some people. Other people knew where the liquor was and had a way to get it: racing cars from state to state stocked with alcohol. Some of the backwoods boys of Virginia and Georgia would load up the cars with moonshine and put the pedal to the metal and speed down from one state to the next. Doing all this, with the police hot on their tails. The bootleggers were criminals, but they sure had a darn good time flying from the law. So much fun that someone had the idea to turn a cow pasture into a big track made of dirt. Eventually, enough traction built up with the cars that more and more people were taking stock in the race. Mechanics, bootleggers, farm owners, all had some sort of investment in this system that it became a sport. Junior Johnson was one of the first “greats” of NASCAR, which back then, NASCAR was bootleggin’ moonshine. Johnson was known to outlast any chase and succeeded in sharing the moonshine from state to state without being caught. He started racing on the tracks and started winning. Then came boys were revving their engines trying to win a race. For the first time without the booze in their cars. And so began the birth of NASCAR.

These days, we can sit by the track and enjoy an ice cold beer. Not to mention, no worries of cops chasing us around the tracks. It’s nice how times have changed. However, NASCAR still has it’s roots. It continues to intrigue us as we

watch the cars zoom around the tracks, just as they did way back when. When you’re watching the race, think about those cars stocked with illegal booze and some cops chasing after them. Prohibition was a time of struggle and turmoil, but out came NASCAR and we can thank those bootleggers for starting something great. Because of their persistence, we can now enjoy the thrills and chills from the roaring of the engines and the fun of the race. 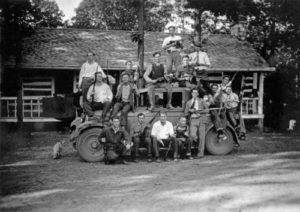 You can find all your NASCAR tickets from Tickets For Less. There’s family 4 packs, suites and more. It’s quite the weekend you don’t want to miss out on. Take part in the roots of America and visit Kansas Speedway this year!