KC baseball and big concerts have a rich tradition. Charles O. Finley forged the relationships between big league ball and big time shows when he brought the Beatles to old Municipal Stadium in 1964.  Less than a decade later, the new Royals Stadium was playing host to A-list acts, just like its predecessor. While tickets to the new expansion ball club were popular, Kansas Citians didn’t just visit the stadium to see the Royals. Concert tickets were a hot com 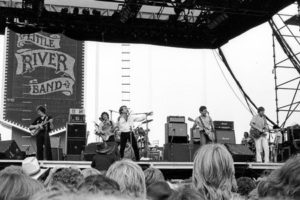 Some of the more notable performers to appear in Kauffman Stadium concerts have included: 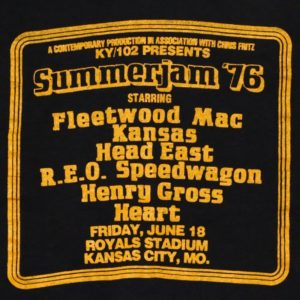 The Summerjam ’76 line-up at Kauffman Stadium. Image courtesy of wycovintage.com.

When REO Speedwagon finished their encore in 1979, Royals (Kauffman) Stadium concerts came to a halt. Gone were the usual, massive Summer Jam concert events. Royals Stadium–later re-named Kauffman Stadium–became a baseball-only facility for decades. Outside of occasional, brief post-game shows on special evenings or pre-game outfield pavilion shows by local acts, there were no more Kauffman Stadium concerts. 2018, marks a return to big shows at the ballpark. Rock and Roll Hall-of-Famer Billy Joel will add his name to the list of significant performers to play “The K.”

Kauffman Stadium has undergone numerous changes and renovations since the 1970s. The core layout of the stadium, however, remains intact. As such, the 2018 Billy Joel show will feature a seating plan similar to those used at  Kauffman Stadium Concerts. 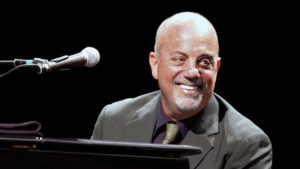 Billy Joel–the next of many Kauffman Stadium concerts? Photo courtesy of wcvb.com.

The stage will be placed in outfield with Billy Joel occupying the territory historically reserved for the use of major league centerfielders.  The stage will face homeplate and many of the fans in attendance will be able to secure tickets on the field.  Lower level, loge and upper level seats, all with a forward-facing view of the performance will be available. This maximizes the available seating while providing the potential to use the Royals’ massive video screen as a behind-the-stage backdrop for the concert.

While perhaps tweaked ever-so-slightly, this is the same Kauffman Stadium concert set up utilized for the shows of the 1970s.

When Billy Joels plays “the K” in September, it will be the first of what KC music fans hope is many Kauffman Stadium concerts!

If you want to go see the first show at the ballpark since 1979, visit Tickets for Less to find great Billy Joel tickets.