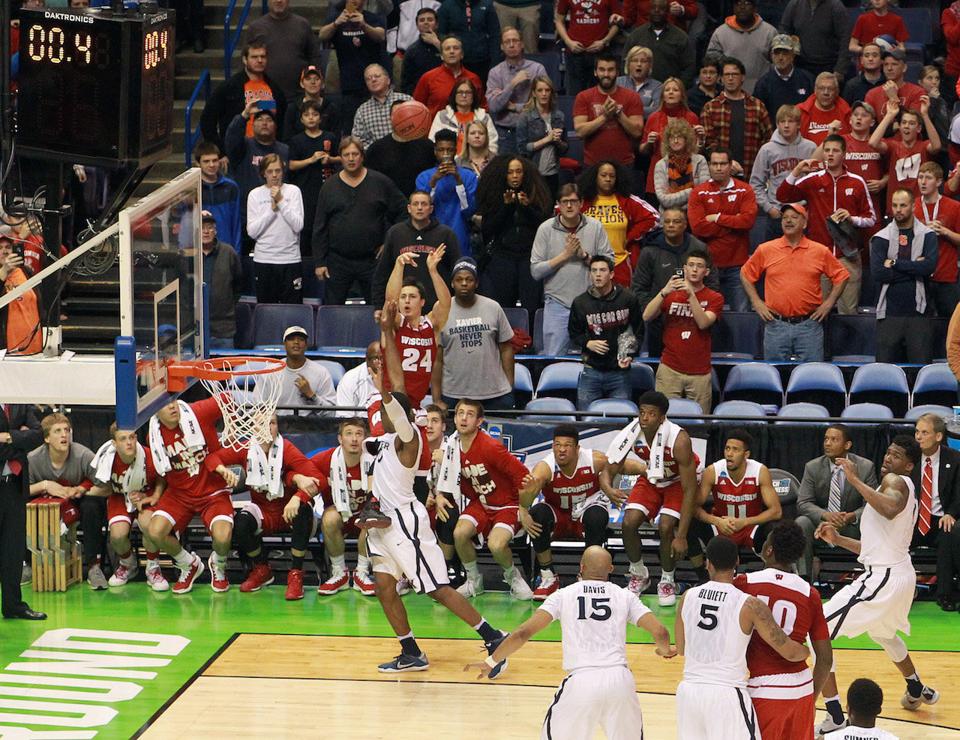 It seems everywhere I went Monday there was still a buzz about those buzzer beaters in the first weekend of the NCAA Tournament. Dramatic stuff. You would be hard pressed to find a more exciting weekend of college hoops in a long time.

A&M’s last minute rally in regulation will go down as the most captivating final 40 seconds of basketball I’ve seen. It was crazy. I can’t comprehend a team going on a 14-2 run in the final half minute to force overtime after getting its butt kicked for 39 minutes. It’s a game those kids from Northern Iowa will sadly never forget. They’re 18, 19, 20 year old young men so I don’t want to sound too harsh but that will be remembered as one of the greatest collapses in the history of this famed tournament.

There were spectacular plays and shots all weekend including the buzzer beater by Bronson Koenig who dropped two three’s in the closing seconds of Wisconsin’s come from behind win over Xavier. The fade away trey in the corner was something to treasure.

Kansas in a very workmanlike fashion, quietly disposed of Austin Peay and UConn over the weekend. It’s the first time in 3 years KU has survived the first weekend. The Jayhawks clearly are playing up to their #1 overall seed after the first two rounds. They are the most complete team in this tournament but that means very little. Just check with the other 15 teams left standing. The bracket is tailor made for a showdown between Kansas and North Carolina for the championship. The Jayhawks and the Tar Heels without question are the 2 best teams in this tournament.

Now on to another subject.

The Big 12 has been embarrassed again. Touted most of the season as the best basketball conference on the planet, more than half of their teams was sent home early, again! The ACC is a superior league. There’s no argument this tournament defines a team’s manhood. Time to put up or shut-up as a league. Kansas wins the Big 12 every year. There is no way the Jayhawks would dominate the ACC. The league is 12-1 in this tournament. The Big 12 is 6-4. The ACC has an all-time record of 6 teams in the Sweet 16. The Big 12 has only half as many. Here’s the proof in the pudding:

One of the story lines coming in was the parity of the teams in the tournament. 10 double digit seeds won games; 2 of them have advanced to the Sweet 16. At the same time, all the No. 1 seeds are still playing but now they must earn their keep. No more easy layups for KU, North Carolina, Virginia and Oregon. No more gimmes on the pat to Houston.