Want to know how your favorite driver can rack up the most points and win the Cup Playoffs? Listen up!

Late last month, NASCAR announced several changes to its racing and points structure for the upcoming season, which begins Feb. 26 with the Daytona 500.  NASCAR also recently announced new lap lengths that will be used during the 2017 racing season, including the fall Monster Energy Cup Series races at Kansas Speedway, as well as new safety protocols, inspection rules, and more.

NASCAR listened to its fans and has created a new race format that will reward performance over the course of the entire season and each race will have two more winning moments. This new format is for all three national touring series and races will now be divided into three segments. The segments are called Stage 1, Stage 2 and Final Stage and the length will vary by track and race time. Stage 1 and 2 will be a total of approximately 25-30 percent of the races total length.

After each stage, there will be a commercial break and an interview with the segment winner. Once the race has ended the final stage, normal points are awarded. 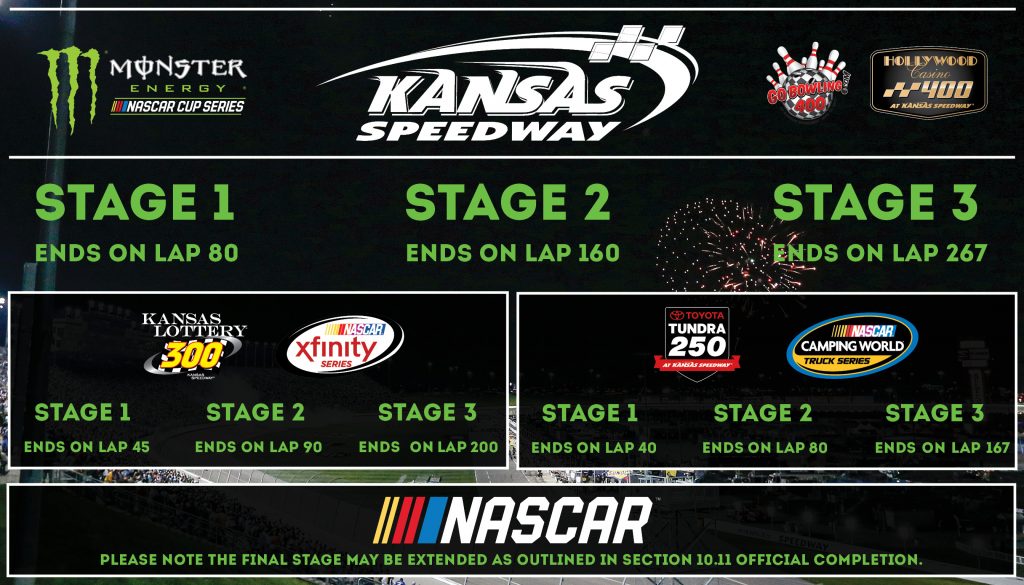 NASCAR implemented a new point structure along with its new racing format. For Stage 1 and 2, points will be awarded to the top 10 drivers using a descending 10-point scale, with one playoff point awarded to the stage winner. Race winners will receive 40 championship points and five playoff points, and the other drivers will receive points on a descending 35-to-2 scale with the bottom five finishers getting one point.

The bonus points will establish playoff seeding for the final 10 races and carry over into the 10-race playoffs.

NASCAR has added new participation guidelines. Monster Energy NASCAR Cup Series drivers with more than give years of full-time experience are limited to ten (10) races in the NASCAR XFINITY Series and seven (7) in the NASCAR Camping World Truck Series. The new guidelines also prohibit those drivers from participating in the final 8 races of the season for the XFINITY and Truck Series. The rule doesn’t apply for any driver with fewer than five years of full-time experience.

The Chase for the NASCAR Sprint Cup is now the Monster Energy NASCAR Cup Series Playoffs. The overall structure of the playoffs will remain the same, but there are some new enhancements.

Playoff points carry over to every round until the final four drivers are decided for Homestead. The four drives will race straight up in the final race.

NASCAR is moving away from their six-tier penalty and instead will prioritize containing infractions to the race weekend on which they have occurred. Potential penalties at the track include loss of hard cards, loss of practice time, loss of pit selection, read of field, green-flag pass through and green-flag stop and go.

NASCAR is boosting its safety practices to make it safer for drivers and fans. Starting this year, it will be expanding its medical support model and one addition is that a licensed medical doctor and paramedics will ride along NASCAR track services to respond to on-track accidents.

Race teams in all three series will no longer be allowed to replace damaged body parts that are the result of accidents or contact. Fixing damaged sheet metal will be allowed, but teams will only have five minutes to repair damage once they enter pit road. When a team is forced to the garage for repairs, the car isn’t allowed to continue the race. Original parts can only be used to repair the car. The car is still be required to maintain the minimum speed determined for the race.

This rule will hopefully eradicate debris cautions and the chance of debris to injure spectators.

According to a NASCAR spokesman, the changes are “a fan-driven thing” and should enhance the viewing experience both on TV and in the stands, creating natural breaks in the action like the end of a quarter or intermission in other major sports.

Get ready for the 2017 NASCAR racing season with Kansas Speedway Tickets at Tickets For Less.