These are the nine points to success for the 2011 Kansas City Royals.

This is what must happen for the Royals to embark on a winning season.

1.) We NEED four starters out of the five to consistently keep us in games for more than six innings. We are notorious for pitching a great five inning game only to eventually lose because of poor relief. I also believe we put ourselves at fault by pulling our pitchers out way too early.

This leads into my next point>>>

2.) We MUST have at least two relief pitchers that can consistently shut down teams in the 7th and 8th inning. I’m so sick and tired of seeing the entire choir getting a fair shot of playing time. Every position is important. There is a 7th inning man- one who only appears in dire situations where the starter can’t quite make past the 6th.  He doesn’t have to be the same person, unlike the 8th and 9th inning man. If a starting pitcher is coming out of the game before the 6th inning, something is wrong. That’s why they are a starter. The best of the best. The smartest, the most talented, and the most durable. Thats why they are there. It’s a 162 game season and you have to get as much as you can out of every single player. Stretch them out. Milk them.

The 8th inning man is a staple in every rotation. He’s just as important as the closer.

3.) In any situation late in a game we have any remote chance of victory, the only person that should be on the mound is Soria. Enough said. No Tejeda business. He’s a candidate for the 8th inning slot.

4.) Billy Butler needs to play DH everyday. I have said it before and I will say it again. No more lolly gagging at first base chewing the bubble gum. We need a Will Clark type of player at first. Hosmer is the man. Butler is the perfect representation of a DH. Anything else is of the element.

5.) Moustakas and Hosmer need to be playing immediately. If they arent on the MLB roster by game 1 then expect us to be the same team. We drool over the potential of these players. What are we waiting for? For them to be Major League ready? Haha that’s funny.

6.) Two of the Greinke recipients need to give us “Greinke type performance,” which even last year, wasn’t that stellar. So Lorenzo Cain and Escobar should know that the expectations aren’t too incredibly high, but if they don’t put up numbers in the slightest bit, then bye bye Dayton Moore in my opinion. I think the young pitcher Jeffress will be a nice player for us. Escobar will surprise people defensively, and Cain has the ability to be a “rally around” type of player. No super stars, but they need to show their worth and back up the framed up intelliegnce Dayton Moore is still by rumor, “known for.”

7.) Focus the attention on the team not the player. When was the last time the Royals just had a “team” and not a couple players that attracted all the attention? No more Sweeney, Gullien, Meche, or Grienke to lay the blame on and point fingers at.

8.) Don’t be hesistant with the minor league talent. I say we put the best player at the postion. No matter age or experience. Dayton Moore has numbered days unfortunately and he needs to take this risk. Myers, Moustakas, Hosmer, Crow, Montgomery, etc should all play an integral part on the team from the beginning of the season.

9.) Stick to a routine. I think Ned Yost understands and trusts this concept. Trey Hillman was the worst at it by always making changes. No confidence is his game plan whatsoever. The playoff teams dont have too much of a different team from day one to October and the Royals should be that way too.

Yeah it’s a downer, but these  nine keys to success will never happen at the same time.

It’s just the way I would go about the situation considering A) the way of the past  and B) the unlimited time remaining to make a change. At this point we can only take one approach and Robert Frost put it best when he said:

“I took the road less traveled, and that has made all the difference.”

Tickets For Less is the best place locally for Kansas City Royals tickets and nationally for any other team in Major League Baseball. 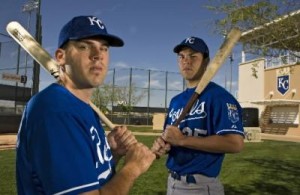